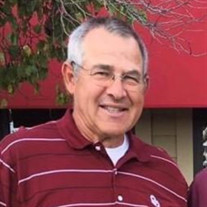 William Bradley Murray, 65, of Owasso, Oklahoma, took the hand of his Lord Jesus to Heaven on Saturday, April 24, 2021. He was born to Shirley Ann Harrison Murray and Billy Joe Murray on January 11, 1956 in Bartlesville, Oklahoma. William attended and Graduated from Dewey High School in 1974. He married Susan Cullison on June 9, 1977. William attended University of Oklahoma in 1978 and earned his bachelor’s degree of Business Admin in Finance. He was a member of Pi Kappa Phi Fraternity. William did Sports Officiating for over 40 years for several sports including, Football, Basketball, Baseball, Softball, and Volleyball for High school and College. He loved watching OU Football, Saint Louis Cardinals and Las Vegas Raiders. William was a faithful Christian servant for 60 years. He was a friend to all he met.
William is preceded in death by his Mother, Shirley Ann McMunn, Father-in-Law, Stephen Cullison and Mother-in-law, Wilberta Cullison.
He is survived by his Wife, Susan Murray, Son, Adam Murray and Wife Mandy, Daughters, Andrea Allen and Husband Tyler, Dr. Alicia Murray-Worth and Husband Brandon, Father, Billy Joe Murray, Stepmother, Oleta Murray, Brother, Dr. Warren Murray, Brother-in-law, Gerald Cullison and Wife Michelle, Grandchildren, Chloe Allen, Cinch Allen, Colten Allen, Cactus Allen, Beau Worth, Briley Worth, Numerous Aunts, Uncles, Cousins, Nieces and Nephews.
______________________________________________________________________

Kenneth “Lance” DeVore was born April 24, 1973 in Okmulgee, Oklahoma to Floyd Kenneth DeVore, Jr, and Catherine Sue (Gaither) January. He died Wednesday, August 26, 2020. He was raised and educated in Owasso, Oklahoma and graduated with the Owasso High School Class of 1992. Lance went on to attend courses and play baseball for Hillsdale Freewill Baptist College in Moore, Oklahoma. He was married October 21, 1995 to Laura (Hansen) Devore. Lance spent most of his working life as an Airplane Mechanic with various Airline companies in Tulsa. He was a member of Owasso First Assembly of God Church. In his spare time between raising five kids, Lance enjoyed a variety of past times such as coaching and umpiring baseball, fishing (if he could stay in the boat), but most of all he loved his family. As his mentor Coach Holloman put it best, “No one loved Owasso baseball more than Lance DeVore.” Lance’s Christmas spirit rivaled Santa Clause, from singing random Christmas carols all year long to dressing in his famous holiday attire.

Shon Wisdom Chester
Shon passed away on Monday, Jan. 30, 2017 at the age of 44.
The son of Johnny and Lois Kimbrell was born February 29, 1972 in Lubbock, Texas. In 1976 his family moved to Oklahoma. They lived in Tulsa and a couple of other places before settling in Claremore in 1979. Shon then entered Claremore Schools.
There he became active in many things over the years such as student council and sports, where he excelled on the football field. After graduating in 1991 Shon continued his education at the University of Central Oklahoma. Earning a bachelor’s degree in science.
When Shon began his working career, he knew he wanted to help people, especially kids. He took a job working as a mentor to children at an adolescence center in Oklahoma City.
That followed by having one of the highest honors as a full time caregiver to the 4 Cody boys.
In 2002 a big change occurred in Shon’s life. While home visiting his brother for Thanksgiving, he met Barbara and from then on they were inseparable. Then on October 17, 2003 Shon and Barbara where married, he not only married Barbara but was an instant father to their 4 children , Preston, Taylin, Creedon, and Riann .They made their home in Claremore and Shon’s career switched gears.
He began working almost daily as an umpire for high school, college, and semi pro baseball. Umpiring was his passion, he always said you could teach a kid how to play the game right and how to be an outstanding man in life. Then he coached at Clinton Middle School, and for many years coached for Verdigris little league football.
He loved nothing more than teaching the game, but more importantly touching the lives of boys who would become men. He loved coaching most of all his son Creedon, their bond is like no other.
Eventually Shon gave up his coaching and umpiring, when his son started playing school ball, the thought of missing a game was not an option.
This gave him the opportunity to return to his true passion of wanting to help people. He took a job in healthcare administration at Forest Hills and Forest Hills Assisted living helping the elderly.
Shon was passionate about making the future of our kids better and he did this by serving on the Claremore school board, which he honored dearly. In his spare time, Shon enjoyed woodworking and spending time with his friends.
He was also an active member of the Verdigris Assembly of God Church.
He is preceded in death by his parents, Johnny and Louis Kimbrell, and brother, Heath Chester.
His loving family that survives him include his wife Barbara; children, Preston Hassell and wife Courtney, Taylin Hassell, Creedon Hassell and Riann Hassell; brothers, George Chester and wife Emily, and Allie Chester; nieces and nephews, Victoria, Allie, Meagan, Jonny, James, Josh, Brandon, Justin, Tracy, and Madison , great nieces and nephews along with many, many friends.

Floyd “Gene” Eugene Lewellen, 63 passed away on Thursday, December 29, 2016. He was born October 9, 1953 to Rex Lewellen and Yoneko Yamashita Lewellen in Albuquerque, New Mexico. Gene married Mary Harlan on April 1, 1988 in Tulsa, Oklahoma. Gene enjoyed baseball coaching and officiating, golf, and all kinds of sports. He was an avid reader. He was a member of OSSAA Officials Hall of Fame 2014. Gene was also a Rotarian and a member of the United Methodist Men.
Preceding his death was his father, Rex. Left to cherish the memory of Gene is his wife, Mary of the home, daughters, Courtney Lewellen of Shawnee, Whitney Lewellen of Tulsa, son and wife, Eric and Steph Lewellen of Fort Mill, South Carolina, daughter and husband, Maggie and Brent Bailey of Okmulgee, mother, Yoneko Lewellen of Oklahoma City, brother, Terry Lewellen of Oklahoma City, and brother and wife, David and Patty Lewellen of Oklahoma City. He is also survived by grandchildren, Mason Bailey of Okmulgee, Ethan Gallagher of Tulsa, Maryl and Justin Lewellen of Shawnee and Charlotte and Audrey Lewellen of South Carolina.
A memorial service for Gene will be held at 1:00 P.M. on Tuesday, January 3, 2017, at the First United Methodist Church of Okmulgee. Rev. Roland Youngberg will officiate. Honorary Pallbearers will be Brent Bailey, Andrew Harlan, Alex Hess, Jackson Hess, Mark Hess, Tyler Lewellen, Shane Lewellen, Harold Fox, Dave Gibson, Jered Jones, Daryl Maxville, Mike Sexton and Mat Wilson.

Philip graduated from Tahlequah High School in 1974 and went on to earn his Bachelor of Arts Degree in Journalism in 1978. He married the love of his life, Jeri Chandler, in 1982 and to this union was born one daughter, Leslie, in 1984.
He later returned to college and earned his Master’s Degree in Health & PE in 1999. He worked for many years for Grandview Public Schools. Philip enjoyed tennis, officiating ballgames, watching all sports and he enjoyed helping people.
He loved his family and friends and enjoyed spending time with all of them. Philip touched many lives over the years and will be dearly missed by all who knew and loved him.

He was preceded in death by his parents and his wife Jeri Burrows.

Kevin Scott Radford passed peacefully in his sleep on July 17th, 2016 at his home. Anyone that knew Kevin enjoyed a wonderful friendship and someone who was always willing to help.

He took pride in taking care of his family and has been a survivor of many health issues for the last twenty years. His friends were important to him and he strived to keep in touch with all his friends and loved ones. His passion was baseball, and being outdoors is what he loved. He overcame so many problems and he never quit trying.

He was a volunteer for Spotlight Theater for years and helped out where ever needed. He always helped even if it was someone he had just met.

He had a great heart and loved genuinely.

Dale (D.K.) Ketterman passed away Tuesday, May 25, 2016 after a 4 year battle with cancer at the age of 74. He was born August 24, 1941 in Tulsa, Ok to Harley Ketterman & Anna Parnell Ketterman. After attending Central High School, Dale joined the Army and was stationed in Baumholder, Germany. During his 3 year service Dale made many friends who he stayed in touch with over the years. He retired from Safeway as a warehouseman for 32 years. After 45 years as a high school collegiate baseball umpire, Dale was inducted into The Oklahoma Officials Hall of Fame in 2010. Dale was preceded in death by his parents and his beloved daughter, Camra. He is survived by his partner, Beverly, of over 30 years; his daughter, Beth Ketterman of Coweta; his son and wife, Kit Ketterman and Jenna of Austin, Tx.; 4 grandchildren: Buddy Ketterman, Shasta Cochran Ruiz, Paige Ketterman and Coleman Hales; 2 great grandchildren; Julian Ruiz and Emerie Hales; as well as numerous step children, grandchildren and great grandchildren that all loved Dale. He enjoyed watching his Sooners and Yankees, playing softball, golfing, reading, cross-word puzzles and listening to music.

David was born on September 8, 1950 and passed away on Sunday, January 3, 2016. David was a resident of Tulsa, Oklahoma at the time of his passing. He was a 1968 graduate of Edison High School. He was married to Barbara.

David had a huge impact on many of the officials calling today. He spend a lot of time helping newer officials.

Robert Frank Stay Jr., 59, a familiar face to many Sandite sports participants and their families passed away in Tulsa on Friday, September 4, 2015. One of four children of Robert Frank Stay Sr. and Ruth Eleanor (Holdeman) Stay, he was born in San Antonio TX on October 11, 1955. Sandra Joy Mashburn/Reese and Robert were joined in marriage in Sand Springs on August 6, 1976, and had just recently celebrated their 39th wedding anniversary. Robert retired in April from Darr Equipment where he was the Sales Manager.

An outdoorsman, Robert enjoyed hunting, fishing, and sports of all kinds. He could be found all around Sand Springs, volunteering his time to coach little league teams, and Salvation Army sporting activities. Above all though he loved his grandchildren and actively participated in their lives and events.

Lance Jeffrey Agnew, 53, passed away at home on November 30, 2009. Brain cancer took his earthly life, then Jesus received him for eternity. Lance was born in Tulsa on November. 23, 1956, into the loving arms of his parents, Harry Jerrett Agnew and Shirley Agnew Heggland. In 1982, he graduated from the University of Tulsa, where he met his wife of 28 years, Rebecca Rowe Agnew. Lance started his career as a CPA with Lohrey and Jay. He then worked for Marjo Oil Co., Amoco, and most recently as a Utilities Manager with the City of Tulsa. His hobbies included flying, bicycling, skiing and reading. For 15 years he officiated baseball and football games, helping thousands of kids learn to “play by the rules.” Lance was the consummate family man, blessed to be called “Dad” by Spencer, Henry, and Helen, and “brother” by Leslie Polasek, Jennifer Agnew, and Richard Agnew.